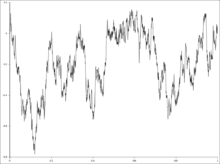 Brownian motion, pinned at both ends. This represents a Brownian bridge.

The expected value of the bridge is zero, with variance

, implying that the most uncertainty is in the middle of the bridge, with zero uncertainty at the nodes. The covariance of B(s) and B(t) is

Relation to other stochastic processes

If W(t) is a standard Wiener process (i.e., for t ≥ 0, W(t) is normally distributed with expected value 0 and variance t, and the increments are stationary and independent), then

Conversely, if B(t) is a Brownian bridge and Z is a standard normal random variable independent of B, then the process

The Brownian bridge may also be represented as a Fourier series with stochastic coefficients, as

A Brownian bridge is the result of Donsker's theorem in the area of empirical processes. It is also used in the Kolmogorov–Smirnov test in the area of statistical inference.

A standard Wiener process satisfies W(0) = 0 and is therefore "tied down" to the origin, but other points are not restricted. In a Brownian bridge process on the other hand, not only is B(0) = 0 but we also require that B(T) = 0, that is the process is "tied down" at t = T as well. Just as a literal bridge is supported by pylons at both ends, a Brownian Bridge is required to satisfy conditions at both ends of the interval [0,T]. (In a slight generalization, one sometimes requires B(t1) = a and B(t2) = b where t1, t2, a and b are known constants.)

Suppose we have generated a number of points W(0), W(1), W(2), W(3), etc. of a Wiener process path by computer simulation. It is now desired to fill in additional points in the interval [0,T], that is to interpolate between the already generated points W(0) and W(T). The solution is to use a Brownian bridge that is required to go through the values W(0) and W(T).