RStudio is an integrated development environment for R, a programming language for statistical computing and graphics. It is available in two formats: RStudio Desktop is a regular desktop application while RStudio Server runs on a remote server and allows accessing RStudio using a web browser.

The RStudio integrated development environment (IDE) is available with the GNU Affero General Public License version 3. The AGPL v3 is an open source license that guarantees the freedom to share the code.

The RStudio IDE is partly written in the C++ programming language and uses the Qt framework for its graphical user interface.[6] The bigger percentage of the code is written in Java. JavaScript is also amongst the languages used.[7]

In April 2018, RStudio PBC (at the time RStudio, Inc.) announced that it will provide operational and infrastructure support to Ursa Labs[11] in support of the Labs focus on building a new data science runtime powered by Apache Arrow.[12]

In April 2019, RStudio PBC (at the time RStudio, Inc.) released a new product, the RStudio Job Launcher. The Job Launcher is an adjunct to RStudio Server.[13] The launcher provides the ability to start processes within various batch processing systems (e.g. Slurm) and container orchestration platforms (e.g. Kubernetes). This function is only available in RStudio Server Pro (fee-based application).

In addition to the RStudio IDE, RStudio PBC and its employees develop, maintain, and promote a number of R packages.[14] These include: 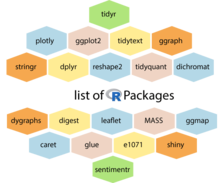 The RStudio IDE provides a mechanism for executing R functions interactively from within the IDE through the Addins menu.[17] This enables packages to include Graphical User Interfaces (GUIs) for increased accessibility. Popular packages that use this feature include:

The RStudio IDE is developed by RStudio, PBC, a public-benefit corporation[18] founded by J. J. Allaire,[19] creator of the programming language ColdFusion. RStudio, PBC has no formal connection to the R Foundation, a not-for-profit organization located in Vienna, Austria,[20] which is responsible for overseeing development of the R environment for statistical computing. In July 2022, RStudio announced that it changed its name to Posit, to signify its broadening exploration towards other programming languages such as Python.[21]