listen)) is a project with goals to develop open-source software, open standards, and services for interactive computing across multiple programming languages. It was spun off from IPython in 2014 by Fernando Pérez and Brian Granger. Project Jupyter's name is a reference to the three core programming languages supported by Jupyter, which are Julia, Python and R. Its name and logo are an homage to Galileo's discovery of the moons of Jupiter, as documented in notebooks attributed to Galileo. Project Jupyter has developed and supported the interactive computing products Jupyter Notebook, JupyterHub, and JupyterLab. Jupyter is financially sponsored by NumFOCUS.[1] 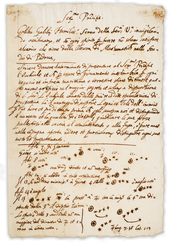 A manuscript ascribed to Galileo Galilei's observations of Jupiter (⊛) and four of its moons (✱), which inspired the Jupyter logo

The first version of Notebooks for IPython was released in 2011 by a team including Fernando Pérez, Brian Granger, and Min Ragan-Kelley.[2] In 2014, Pérez announced a spin-off project from IPython called Project Jupyter.[3] IPython continues to exist as a Python shell and a kernel for Jupyter, while the notebook and other language-agnostic parts of IPython moved under the Jupyter name.[4][5] Jupyter supports execution environments (called "kernels") in several dozen languages, including Julia, R, Haskell, Ruby, and Python (via the IPython kernel).

Visual Studio Code supports local development of Jupyter notebooks. As of July 2022, the Jupyter extension for VS Code has been downloaded over 40 million times, making it the second-most popular extension in the VS Code Marketplace.[13]

The Atlantic published an article entitled "The Scientific Paper Is Obsolete" in 2018, discussing the role of Jupyter Notebook and the Mathematica notebook in the future of scientific publishing.[14] Economist Paul Romer, in response, published a blog post in which he reflected on his experiences using Mathematica and Jupyter for research, concluding in part that Jupyter "does a better job of delivering what Theodore Gray had in mind when he designed the Mathematica notebook."[15]

In 2021, Nature named Jupyter as one of ten computing projects that transformed science.[8]

JupyterLab is a newer user interface for Project Jupyter, offering a flexible user interface and more features than the classic notebook UI. The first stable release was announced on February 20, 2018.[16][17] In 2015, a joint $6 million grant from The Leona M. and Harry B. Helmsley Charitable Trust, The Gordon and Betty Moore Foundation, and The Alfred P. Sloan Foundation funded work that led to expanded capabilities of the core Jupyter tools, as well as to the creation of JupyterLab.[18]