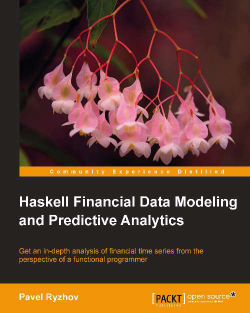 Haskell is one of the three most influential functional programming languages available today along with Lisp and Standard ML. When used for financial analysis, you can achieve a much-improved level of prediction and clear problem descriptions.

Haskell Financial Data Modeling and Predictive Analytics is a hands-on guide that employs a mix of theory and practice. Starting with the basics of Haskell, this book walks you through the mathematics involved and how this is implemented in Haskell.

The book starts with an introduction to the Haskell platform and the Glasgow Haskell Compiler (GHC). You will then learn about the basics of high frequency financial data mathematics as well as how to implement these mathematical algorithms in Haskell.

You will also learn about the most popular Haskell libraries and frameworks like Attoparsec, QuickCheck, and HMatrix. You will also become familiar with database access using Yesod’s Persistence library, allowing you to keep your data organized. The book then moves on to discuss the mathematics of counting processes and autoregressive conditional duration models, which are quite common modeling tools for high frequency tick data. At the end of the book, you will also learn about the volatility prediction technique.

Pavel Ryzhov has graduated from the Lomonosov Moscow State University in Russia in the field of mathematical physics, Toda equations and Lie algebras. In the past 10 years, he has worked as a Technical Lead and Senior Software Engineer. In the last three years, Pavel lead a startup company that mainly provided mathematical and web software development in Haskell. Also, he works on port of Quantlib, an HQuantLib project in his spare time.