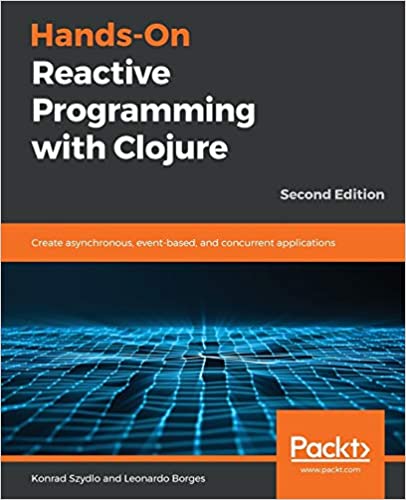 By Konrad Szydlo and Leonardo Borges

Reactive Programming is central to many concurrent systems, and can help make the process of developing highly concurrent, event-driven, and asynchronous applications simpler and less error-prone.

This book will allow you to explore Reactive Programming in Clojure 1.9 and help you get to grips with some of its new features such as transducers, reader conditionals, additional string functions, direct linking, and socket servers. Hands-On Reactive Programming with Clojure starts by introducing you to Functional Reactive Programming (FRP) and its formulations, as well as showing you how it inspired Compositional Event Systems (CES). It then guides you in understanding Reactive Programming as well as learning how to develop your ability to work with time-varying values thanks to examples of reactive applications implemented in different frameworks. You’ll also gain insight into some interesting Reactive design patterns such as the simple component, circuit breaker, request-response, and multiple-master replication. Finally, the book introduces microservices-based architecture in Clojure and closes with examples of unit testing frameworks.

By the end of the book, you will have gained all the knowledge you need to create applications using different Reactive Programming approaches.

What you will learn

Who this book is for

If you’re interested in using Reactive Programming to build asynchronous and concurrent applications, this is the book for you. Basic knowledge of Clojure programming is necessary to understand the concepts covered in this book.

Konrad Szydlo has worked with Clojure for the last 7 years. Since January 2016, he has worked as a software engineer and team leader at Retailic, responsible for building a website for the biggest royalty program in Poland. Prior to this, he worked as a developer with Sky, developing e-commerce and sports applications, where he used Ruby, Java, and PHP. He is also listed in the Top 75 Datomic developers on GitHub.

Konrad is a part of the Clojurian Slack community, is very interested in functional programming, and gave a Datomic Database talk at the ClojureD conference in Berlin in 2015. He also gave a talk on Creating reactive components using ClojureScript React wrappers during Lambda Days in Kraków in 2016.

Leonardo Borges is a programming languages enthusiast who loves writing code, contributing to open source software, and speaking on subjects he feels strongly about. He has used Clojure professionally, both as a lead consultant at ThoughtWorks and as a development team lead at Atlassian, where he helped build real-time collaborative editing technology.

Leonardo is currently the CTO for MODRON. Apart from this book, he contributed a couple of chapters to Clojure Cookbook, O’Reilly.

Leonardo founded and currently runs the Sydney Clojure User Group in Australia. He also writes posts about software, with a focus on functional programming, on his website. When he isn’t writing code, he enjoys riding motorcycles, weightlifting, and playing the guitar.