listen)) is a project and community whose goal is to "develop open-source software, open-standards, and services for interactive computing across dozens of programming languages".[2] It was spun off from IPython in 2014 by Fernando Pérez. Project Jupyter's name is a reference to the three core programming languages supported by Jupyter, which are Julia, Python and R, and also a homage to Galileo's notebooks recording the discovery of the moons of Jupiter. Project Jupyter has developed and supported the interactive computing products Jupyter Notebook, JupyterHub, and JupyterLab. 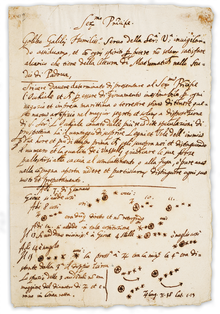 Galileo Galilei's manuscript from 1610 with observations of Jupiter (⊛) and four of its moons (✱), whose depiction helped inspire the Jupyter logo.

In 2014, Fernando Pérez announced a spin-off project from IPython called Project Jupyter.[3] IPython continues to exist as a Python shell and a kernel for Jupyter, while the notebook and other language-agnostic parts of IPython moved under the Jupyter name.[4][5] Jupyter is language agnostic and it supports execution environments (aka kernels) in several dozen languages among which are Julia, R, Haskell, Ruby, and of course Python (via the IPython kernel).[6]

In 2015, GitHub and the Jupyter Project announced native rendering of Jupyter notebooks file format (.ipynb files) on the GitHub platform.[7][8]

A Jupyter Notebook can be converted to a number of open standard output formats (HTML, presentation slides, LaTeX, PDF, ReStructuredText, Markdown, Python) through "Download As" in the web interface, via the nbconvert library[9] or "jupyter nbconvert" command line interface in a shell. To simplify visualisation of Jupyter notebook documents on the web, the nbconvert library[10] is provided as a service through NbViewer[11] which can take a URL to any publicly available notebook document, convert it to HTML on the fly and display it to the user. 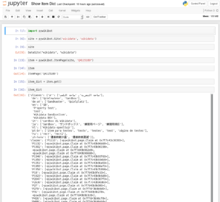 Jupyter Notebook can connect to many kernels to allow programming in different languages. By default Jupyter Notebook ships with the IPython kernel. As of the 2.3 release[12][13] (October 2014), it was 49 Jupyter-compatible kernels for many programming languages, including Python, R, Julia and Haskell.[14]

A Jupyter kernel is a program responsible for handling various types of requests (code execution, code completions, inspection), and providing a reply. Kernels talk to the other components of Jupyter using ZeroMQ, and thus can be on the same or remote machines. Unlike many other Notebook-like interfaces, in Jupyter, kernels are not aware that they are attached to a specific document, and can be connected to many clients at once. Usually kernels allow execution of only a single language, but there are a couple of exceptions.[citation needed]

JupyterHub[17] is a multi-user server for Jupyter Notebooks. It is designed to support many users by spawning, managing, and proxying many singular Jupyter Notebook servers.[citation needed] While JupyterHub requires managing servers, third-party services like Jupyo[18] provide an alternative to JupyterHub by hosting and managing multi-user Jupyter notebooks in the cloud.

nbgrader is a tool for creating and grading (marking) assignments in Jupyter notebooks.[22] It allows the instructor to create assignments that include coding exercises in python or any other supported kernel and text responses. The submitted assignments can be automatically marked, manually scored or a mixture of both.

"Colaboratory" redirects here. It is not to be confused with Collaboratory.

Google Colaboratory (also known as Colab) is a free Jupyter notebook environment that runs in the cloud and stores its notebooks on Google Drive. Colab was originally an internal Google project; an attempt[26] was made to open source all the code and work more directly upstream, leading to the development of the "Open in Colab" Google Chrome extension,[27] but this eventually ended, and Colab development continued internally. As of October 2019, the Colaboratory UI only allows for the creation of notebooks with Python 2 and Python 3 kernels; however, an existing notebook whose kernelspec is IR or Swift will also work, since both R and Swift are installed in the container. Julia language can also work on Colab (with e.g. Python and GPUs; Google's tensor processing units also work with Julia on Colab[28]).[29][30]